Pee on that stick!!!

I never in my wildest dreams thought I would be so well versed on telling people how to pee on a stick.  Being that I have worked in the women’s reproductive health industry for the last 10 years and we sell an ovulation predictor kit, you can imagine how many women I have talked to about this.  I will never forget one woman that I spoke with.   She called our customer service line and had some questions about exactly how to pee on the stick.  I never thought it would be difficult to simply pee on a stick, but I suppose when you are trying to make a baby, you can never be too sure about anything.  Better safe than sorry I guess, at least for this woman.  She proceeded to ask me if she should hold her leg up on the toilet and put the stick under her leg or if she should dip the stick in the toilet water.  I honestly had to hold back my laughter.  I certainly wasn’t judging, as this was not the first time I was asked some “off the cuff” questions, but it gave me quite a giggle to imagine a woman dipping her ovulation stick into toilet water or the image of her holding her leg up while trying to pee on the stick.  Regardless, after 15 minutes of “coaching” I was able to talk her through the process and she was able to successfully pee on her stick. 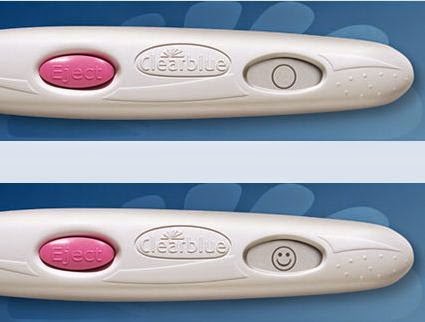 In the process of trying to make a baby, I feel like all women do is pee on sticks.  Whether it is to predict the timing of your ovulation or to test whether you were actually pregnant or not, there’s a lot of peeing on sticks that happens when trying to conceive.  I recall my wife having pee sticks in every purse she owned, in every bathroom we had in our house, and even hidden in the most obscure places.  And then when you actually have to interpret the results of the pee on a stick?  Forget it.  There are so many different brands and the way they tell you if it’s a positive or a negative can vary so drastically.  Some do the smiley or sad face, some just say yes or no, some make you interpret colors (as if peeing on the stick wasn’t hard enough).  And then there is the waiting for the results.  How can 5 minutes feel like 5 hours?  I can’t begin to explain how excruciating those 5 minutes would be when waiting for the results.  Over time, the OPK test’s get easier and easier because you know that if you get a negative and are not ovulating, you still have more chances to get a positive, so you don’t feel discouraged.  But waiting for the pregnancy test results was a whole other ball game.  Those were probably the toughest 5 minutes of the entire process. 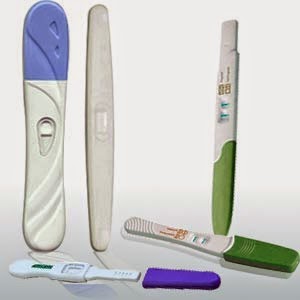 But back to the OPK’s.  There are so many options and so many different ways to interpret the sticks, how does one choose?!  The feminine care product aisle at your drugstore can be quite overwhelming.  Well, at least to me it used to be.  I would walk into that aisle and when looking at all of the options for ovulation predictors and pregnancy tests, it was like trying to pick a green M&M out of a bag of red M&M’s.  Who the heck knows which is the best or easiest to read?!  Luckily, I had a bit of knowledge going into this but my wife had her own preferences which did not overlap with my knowledge, so ultimately it didn’t even matter at the end of the day.  I bought what my wife liked.  Period end of story.  A valuable lesson learned early on in this process for me.  Just say yes to the wife and get what she wants.  Wait until I tell you about her pregnancy cravings and what trips to the grocery store used to look like for us… I’m pretty sure I ate cereal and ice cream for dinner at least twice a week.  Until then, don’t fret too much about peeing on sticks.  Just let it flow…